Ep 22 - A Summer Beyond Your Reach with Xia Jia 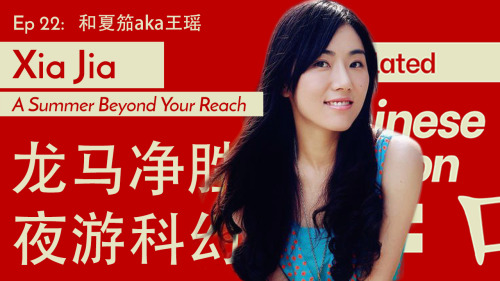 'The summer isn’t over yet. There are so many fun things to do.'

In the twenty second episode of The Translated Chinese Fiction Podcast, we are looking at Xia Jia's A Summer Beyond Your Reach (你无法抵达的夏天/nǐ wúfǎ dǐdá de xiàtiān)

Xia Jia herself joins me via Skype from California to talk about her stories. French culture comes up three times in this episode. I really didn’t see that coming. Xia Jia’s stories do fuse deep thought with deep feeling, which I suppose does sound a bit French. Anyway! It’s a very fun episode, so have a listen.

Words from the writers

Between memory and reality there are awkward discrepancies

Whoever thinks he is objective must already be half drunk

Life is an abyss. But so what?

The best attributes of anyone or anything usually reside on the surface, which is where, in fact, all of us live out our lives

Faced with the absurd reality of contemporary China, the writer cannot fully explore or express the possibilities of extreme beauty and extreme ugliness without resorting to science fiction

I tried. I put everything into being an exceptional student. But those things are like water cast out in the desert, they evaporate quickly. Whenever I started something, I would picture its inevitable ending. An apple becomes pips in the trash

Where there’s life, death is inevitable. Dying’s easy; it’s living that’s hard. The harder it gets, the stronger the will to live. And the greater the fear of death, the greater the struggle to keep on living

In reading Western science fiction, Chinese readers discover the fears and hopes of Man, the modern Prometheus, for his destiny, which is also his own creation. Perhaps Western readers can also read Chinese science fiction and experience an alternative Chinese modernity and be inspired to imagine an alternative future

The ten thousand things, the grass as well as the trees, while they live are tender and supple. When they die they are rigid and dry

In truth, it is I who have defiled myself, for one’s self is one’s own fiercest enemy

Mere existence is already the result of incredible luck. Such was the case on Earth in the past, and such has always been the case in this cruel universe

Every person’s heart is an island, trapped by water, sequestered from the world

Underneath the hole is another hole. Do you dare go down?